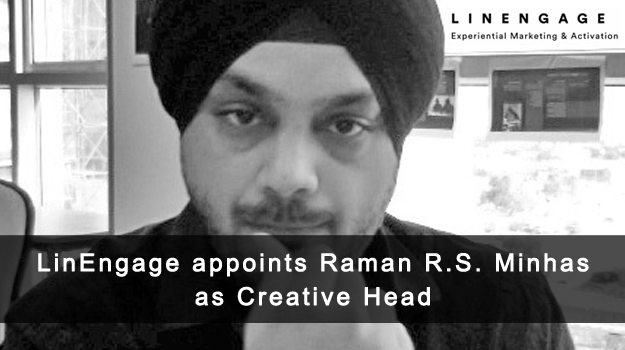 Raman makes an India comeback after successful stints in Indonesia and Dubai, where he held various creative roles at DM Pratama Group, Grey – G2 and TBWA\Tequila

LinEngage, the experiential marketing arm of Mullen Lowe Lintas Group has reported some commendable wins in the last 2 quarters. The agency has also produced an exciting body of work for its clients, notable ones being for entrepreneurial brands such as Byjus, Practo, among the others. To strengthen its core offering, LinEngage has announced the appointment of a seasoned hand at experiential marketing – Raman R.S. Minhas, as Group Creative Director.

Raman comes on board with a mandate to add new, innovative dimensions to the way consumer engagement is defined and delivered for brands, in a media-agnostic manner. He will report to Sriharsh Grandhe – Executive Vice President, LinEngage.

Commenting on the appointment, Sriharsh Grandhe said, “The connected marketplace of today demands agencies to relook at their offerings both the form and format of consumer engagement. With Raman on board LinEngage’s capabilities will be greatly enhanced in this direction.”

This move to LinEngage marks Raman’s return to India after successful stints in Southeast Asia and the Middle East. His last assignment was at DM Pratama Group, one of the biggest Advertising & Media groups in Indonesia, where he led the creative function. Prior to his role in Indonesia, Raman was in Dubai leading brand ideation and consumer experiences across EEMEA region for BAT (British American Tobacco) across 22 countries. He was also handling Nissan for the Middle East region.

Welcoming him into the Mullen Lowe Lintas Group family, Vikas Mehta, Group CMO | President, Group Marketing Services said, “LinEngage is at a pivotal point in its evolution as we strive to set new benchmarks in the practices of experiential marketing and activation. In Raman, we’ve found a world class creative to lead this pursuit, partnering Sriharsh. A strong consumer engagement practice furthers our efforts towards making Mullen Lowe Lintas Group into a true omni-channel partner for its clients through a hyper-bundled offering.”

On being chosen to drive the creative mandate and the new role entrusted upon him, Raman said, “To drive the creative mandate for one of the promising divisions of Mullen Lowe Lintas India is a challenge I am willing to take on with passion. With the legacy of Lowe Lintas and a team that rivals the best in the business, there is only one direction that we can move from here – upward.”

He is also the recipient of multiple awards across important advertising festivals like New York Festivals, DMA ECHO, Dubai Lynx, Promax BDA (USA, Singapore & India), The Loerie Awards (South Africa) and Rx Club Awards. Moreover, it was during his stint at Sony Entertainment TV, that it became the most awarded Channel Network in Asia for that year. He also helped the agency receive the highest rating regionally when handling BAT.